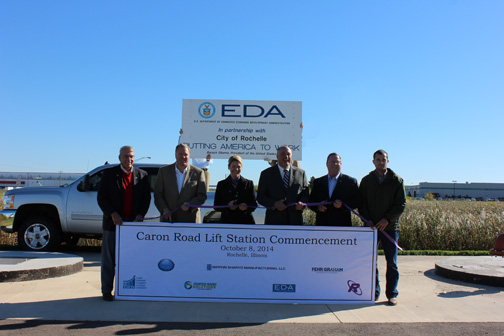 On Wednesday morning October 8th a group of local, State and Federal officials gathered at the Rochelle Municipal Utility - Caron Road Lift Station to commemorate the start up of operations.

The $1,000,000.00 project extended nearly ½ mile of new wastewater sewer lines designed to serve current and future industries located in the "Rochelle Dual Rail Industrial Park". The new lift station capacity will lift more than 1,800 gallons of waste water a minute, which will allow for more than 2,500 acres to be opened up for new industrial development.

The project was funded through the Illinois Department of Commerce and Economic Opportunity, the United States Department of Commerce - Economic Development Administration and the City of Rochelle. Since the project was announced three years ago more than 560 manufacturing related jobs have been created and more than $135 Million has been invested in land, buildings and equipment in the industrial park. Mayor Chet Olson was on hand for the event and commented: "Infrastructure drives job creation and here in Rochelle we know how important infrastructure is to the future economic development growth of our community".

Twelve years ago Rochelle Municipal Utilities (RMU) laid a 21" Sanitary Sewer line into the Rochelle Dual Rail Industrial Park. This large service created the potential to provide industries who are heavily dependent on industrial waste water treatment, to locate in Rochelle . "With the commencement of the Caron Road Lift Station we now can utilize the full potential of the investment we made 12 years ago, as the full capacity of the 21" line can be realized today": said Rochelle City Manager, David Plyman.

Jason Anderson, the City of Rochelle's Economic Development Director said: "The lift station capacity issue was the limiting factor for further industrial development. Now that we have the capacity to handle more than 1,800 gallons of waste water per minute our potential for development is nearly unlimited".

Last week the City of Rochelle celebrated the re-opening of the Rochelle Municipal Airport airstrip, which was extended to 5001'. The expansion also included the construction of a new 1,300 ft taxiway and airstrip lighting system. Along with today's commencement of the Caron Road Lift Station the City celebrated the completion of three City of Rochelle Railroad projects which have more than tripled the railroad's capacity for switching railcars.