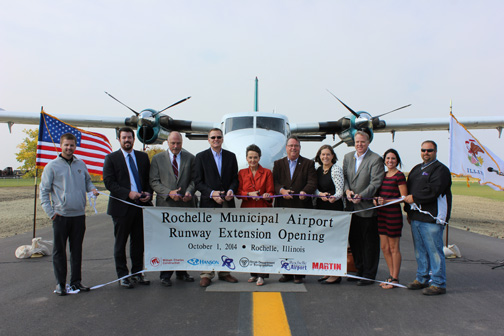 On Wednesday morning the City of Rochelle celebrated the completion of another major infrastructure project. The $2.4 million project included the expansion of the runway and taxiway on Koritz Field at the Rochelle Municipal Airport. The project was successfully executed as a result of a well collaborated plan between the City of Rochelle, the Illinois Division of Aeronautics, the Federal Aviation Administration, and local land owners all who worked to plan, fund and expand the runway. A 775 foot runway extension, a new 1,300 ft taxiway and the installation of an all new landing lighting system were the key components to the project . On hand for the celebration were Dr. Susan Shea, Director of the Illinois Department of Transportation-Division of Aeronautics, Senator Tim Bivins, and a number of local business and government officials.

The construction of the runway extension has opened the door for larger aircraft to land and operate out of the Rochelle Airport. Air traffic has more than tripled over the past year at the airport. Increased operations is spurring plans for future improvements to the airport's infrastructure.

Other city officials boasted that their investment, along with the support of the FAA and the Illinois Department of Transportation in infrastructure, is the key to the City's economic development success. David Plyman, Rochelle City Manager said "Rochelle has become a very attractive location for industrial clients, especially those that require air and rail service. We are blessed to have the support of the Federal Aviation Administration (FAA) and IDOT's Division of Aeronautics on this project". Funding for the project is 90% funded by discretionary money distributed by the State of Illinois and a 10% by the City of Rochelle.

Jason Anderson, Economic Development Director for the City of Rochelle added: "The Rochelle Municipal Airport has become a center of attraction for people of all ages and many industries interested in using the airport. Now larger aircraft can land and operate out of Rochelle which will further boost the airports operations."

The Rochelle Municipal Airport is currently home to four businesses including the Chicagoland Skydiving Center, Rochelle Avionics, A&M Airsports, and the Flight Deck Bar and Grill which received the distinguished "5 Prop Award" as the number one airport restaurant in the State of Illinois.