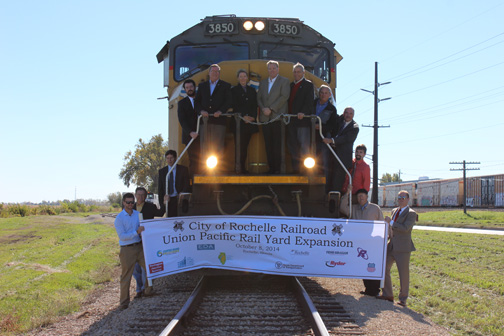 On Wednesday morning Federal, State and City Officials gathered to celebrate the completion of three City of Rochelle Railroad (CIR) projects that totaled more than $1.2 Million in capital investment. The projects included adding two rail sidings on to the Union Pacific/CIR rail interchange rail yard, extending the CIR mainline Track #3 by 2,200 ft and replacing the Caron Road rail crossing. "These rail improvements have increased safety and our capacity to handle larger volumes of rail cars from the Union Pacific Railroad which increases the service we can provide CIR customers" said Mayor Chet Olson.

The City of Rochelle Railroad provides all of its customers equal access to both Class I Railroads: the Burlington Northern Santa Fe Railroad (BNSF) and the Union Pacific Railroad (UP). This unique rail access allows for better rail access, better rail service and industries having "options" when it comes to choosing more than one Class I railroad to provide service.

Funding for the projects came through the Illinois Department of Transportation – Bureau of Railroads, the U.S. Department of Commerce – Economic Development Administration, the City of Rochelle, Ryder Corporation and the Burlington Junction Railway. "We have great partners who have made significant investments in our rail development plan. Our rail system has been the driving force of our industrial development for nearly 30 years" said City Manager David Plyman.

The expansion and improvements to the rail system has now opened the CIR to moving more than 10,000 railcars per year. "This represents a 300% increase in our rail volumes from previous years of operations. The expansion of our rail system is stimulating more industrial development and that means more jobs" said Jason Anderson, the City of Rochelle's Economic Development Director.

Over the past 4 years more than $10 Million has been invested in the CIR which now has the capacity to switch full 100+ railcar "unit trains". This service is opening the door to new opportunities as the trend for industrial rail service is to switch full unit trains on and off the Class I railroads. Infrastructure improvements to the rail system have complimented several other projects the City of Rochelle has completed this Fall.

Last week the City of Rochelle celebrated the re-opening of the Rochelle Municipal Airport airstrip, which was extended to 5001'. The expansion also included the construction of a new 1,300 ft taxiway and airstrip lighting system. Earlier this morning the City celebrated the commencement of the Caron Road Lift Station which has opened more than 2,500 acres to future industrial development.